NEW! ‘Reviving a Vintage Cinema House in Southeast Asia’ – forthcoming eBook and Documentary, subscribe to the mailing list athttp://eepurl.com/bR6XU5 :: In 2009, my team and I in Cambodia rediscovered and revived a vintage cinema house in Kampot, the ‘Royal’, which hadn’t been used since 1989 (it was at the time being used as a water container storage warehouse and hardly resembled a cinema hall…as seen at http://cambofest.blogspot.com/2009/12/initial-pix-content-from-cambofest-2009.html ) 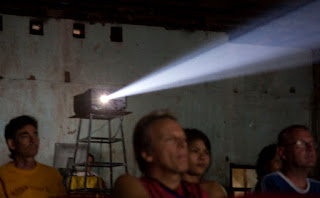 While the art scene in Kampot has recently taken off, at the time, back in 2009, there was resistance from some quarters to the idea of reviving the old cinema hall, and factions within the provincial Culture office clashed with old rivals about bringing the Royal back to life for our event, the CamboFest Film Festival – Cambodia’s first film festival since the end of the Khmer Rouge regime. Meanwhile, interference by foreign movie pirates and friction among some expatriates within the art scene also made things tough going, especially with our puny grass roots budget – probably 1/10,000 that of a typical UNESCO effort. I paid for a lot of the effort out of my own pocket… 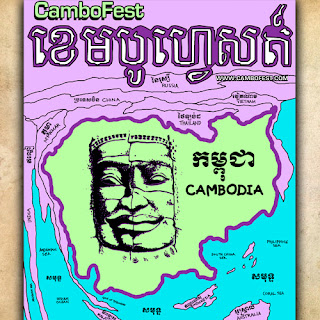 There was no simple, streamlined process to gain permissions at the time, and everything had to be done from scratch. I went to Kampot 15 or 20 times by bus from Phnom Penh, in between teaching jobs, on weekends, etc, to keep things rolling. It was not a simple matter of just asking the family who owned the old cinema hall for permission: there was a difficult and labyrinthine process of figuring out just who to ask to get permissions, and I found that I was often on my own negotiating in Khmer as best I could. 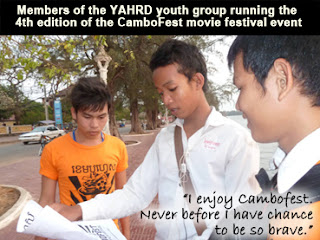 Permission had to be granted from the highest authority at the Minister’s office, and although there were many, many supporters, there were also some folks – foreign and Cambodian – who just didn’t want to see the cinema hall come back for various personal and political reasons. (*I’ll get into this more in the eBook and documentary) Even so, despite all the challenges, the event was a success, thanks to our team, all volunteers, and sponsors including the US Embassy in Phnom Penh. The old Southeast Asian Royal cinema hall sparkled and shone again, after years of dormancy, with an all-digital throughput and customized screen and sound system.

Now, in 2016, more and more cultural events are taking place at the ‘Royal’, thus bringing back to life an entire sector of the cultural economy in Cambodia,  while allowing Mr. Sokun and his family, who are of modest means and who live in the ‘Royale’, to generate some income. Today, permissions appear to be very simple and straightforward – unlike the formidable and nearly impossible process we experienced at the time. It just goes to show that a determined grass roots effort * can * make a difference

Kindly sign up for updates regarding the comprehensive eBook (with photos) about our efforts and the historical process of reviving the old ‘Royal’ movie hall back then, and the short documentary and multimedia project which will accompany it: In the meantime, read more at http://cambofest.blogspot.com/2009/12/initial-pix-content-from-cambofest-2009.html