Camerado’s first feature film, the jazzy and impressionistic New York indie classic movie ‘BookWars‘ (written, directed, and edited by Jason Rosette) joins the company of the films of Andy Warhol, Yoko Ono and others at the Museum of Modern Art in New York City (MoMA) as part of the circulating films collection! 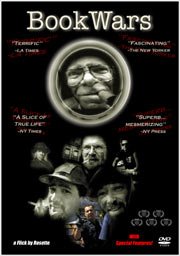 Read the illuminating story behind the making of ‘BookWars’ and other #films by Jason ‘Camerado’ Rosette in the filmmaking #ebook, ‘10,000 Miles to Go: An American Filmmaking Odyssey’ , on Amazon Kindle at http://www.amazon.com/10-000-Miles-Go-Filmmaking-ebook/dp/B019RSQXL0