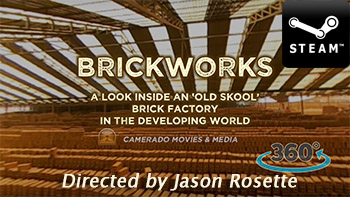 BrickWorks is a hypnotic and immersive 360 VR documentary video portrait of an ‘Old Skool’ brick factory in Cambodia, Southeast Asia.

Produced by Camerado Media in Asia, this is part one in an anticipated 4 part series of factories and brickworks in developing areas of the Asia-Pacific and ASEAN region of Asia.

Rent or Buy BrickWorks on Steam at: http://store.steampowered.com/app/716830/BrickWorks_360/